The weather in Iceland 1994-2011 has been downscaled at a horizontal resolution of 3 km with the ARW-WRF atmospheric model with boundary data taken from the atmospheric analysis of the ECMWF. 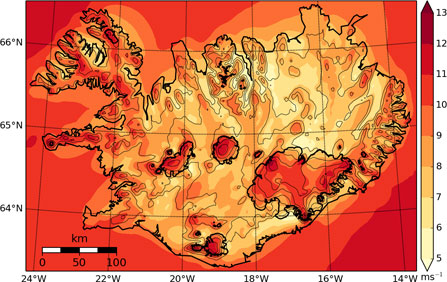 The annual mean winds at 100 m have a maximum of approximately 12 m/s of the southeastern and northwestern coasts of Iceland, a pattern associated with topographic forcing of atmospheric flow associated with the frequent passage of extratropical lows near Iceland. There is also a maximum (10-12 m/s) in the high mountains of Iceland, both at the coast in the west, south and east, as well as inland on the high glaciers. There are many sheltered lowland locations, e.g. in the steep and narrow fjords as well as apparently in the lee of some of the high mountains, while other lowland locations show significantly greater mean winds.

An analysis of the mean winds depending on wind direction (based on winds on top of the central Icelandic ice cap, Hofsjökull) reveals the strong impact of the orography on the mean flow. The weakest mean winds are consequently found on the upstream sides of mountains, as well at the upstream coastline of Iceland. The strongest mean winds are in general found on the upper lee slopes of the high mountains, downstream and along topographic barriers and orography which channels the flow (e.g. mountain passes and fjord openings).

All these features are particularly evident in the frequent easterly flow situations.

We note that northwesterly flow is quite infrequent and consequently the relatively weak NW-winds may be based on a small sample.

This is, however, not always the case. The leeward shift in mean wind speed maxima in the mountains is for example not seen in the frequency of strong winds, and the situations in e.g. the northeastern highlands appears more complex than expected from the mean wind speed maps.  The answers to these complexities are found in the actual shape of the wind speed distribution at individual locations as well as the frequency of topographically induced strong and persistent wind events.